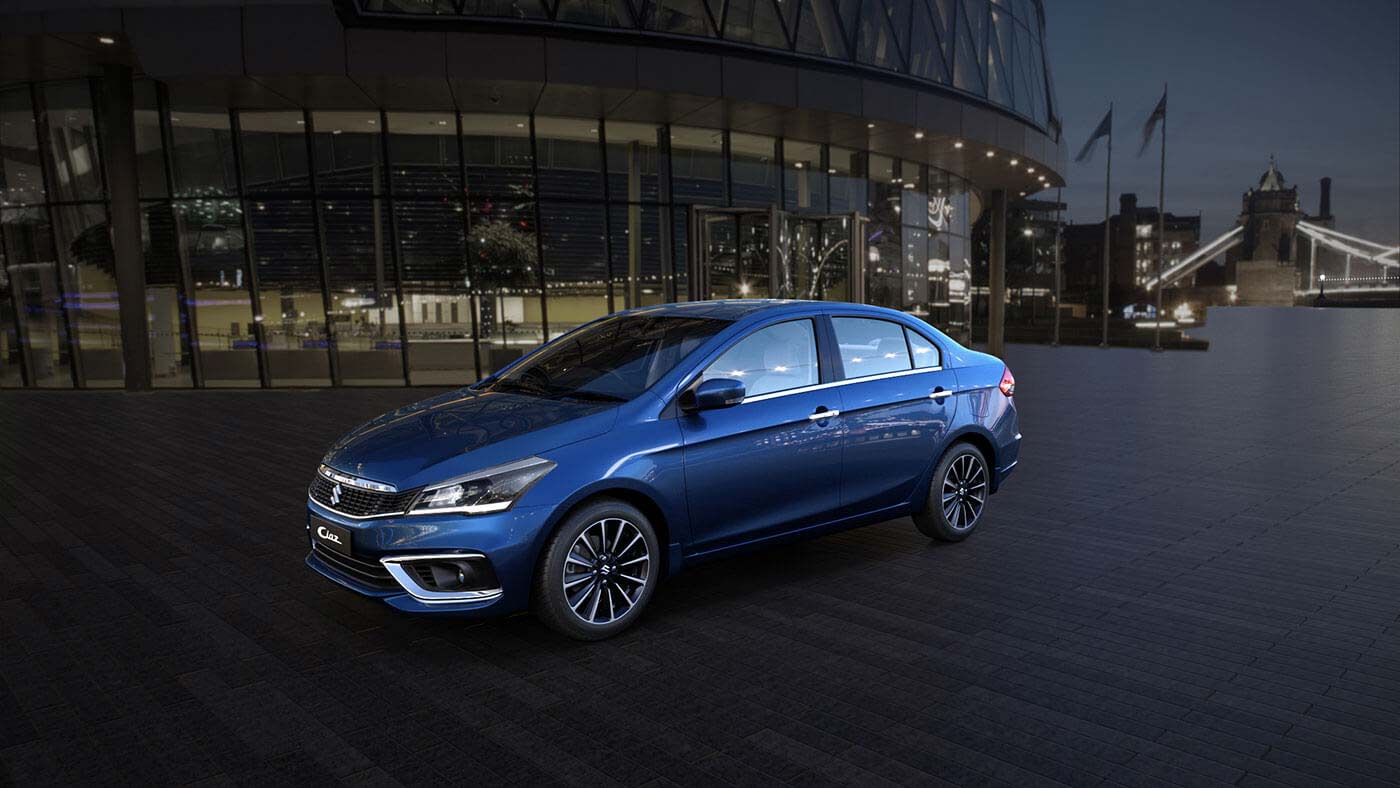 The sedan segment is one of the most popular and hot selling car segment in the Indian Auto Industry. Offering a longer and sleeker body, with a host of premium features, sedans attract the millennial and the veterans alike. And with a lot of diverse options currently running in the market, it is rare for a particular model to build a legacy for itself. But if there is one model that has managed to rule the hearts of the masses and build a legacy for itself, it is the Maruti Suzuki Ciaz. Recently celebrating its 5th anniversary, the Maruti Suzuki Ciaz completed 2.7 lakh units’ sales in India. In this article, we will look at some of the most noteworthy things about the Ciaz, which has helped it become the people’s favourite.

Launched in 2014, the Ciaz made a lasting impression with its style and exterior designing. The Ciaz was designed with Suzuki’s Total Effective Control Technology or S-TECT technology and modern touches that made it stand out from all other Maruti cars. However, at the same time, it did not fail to merge Maruti’s signature three-slat rectangular grille a conservative styling all along the body. To spice thing up the Ciaz featured large projector headlamps and a long rectangular tail lamp giving it a touch of modernity. The Ciaz’s exoskeleton had the largest footprint among all other sedans at that time coupled with 16-inch alloys and chrome garnishing.

Even though the Ciaz was a smart-looking and proportionate car, some users wanted more from the exterior designing. And catering to it’s hugely spread out fan base, Maruti Suzuki launched the Ciaz facelift under the NEXA badging in 2018. The facelift version stood firm to give its users a premium and top-notch experience. The facelift version of the Ciaz saw some major cosmetic changes in its exteriors like the new grille design studded with black elements and a sleek chrome outline.

The front look of the car also supports a new and sharper looking pair of headlamps which not only features an LED projector headlamp but also a DRL. Adding to its masculine styling the facelift version of the Ciaz also gets a redesigned front bumper, with large air dam and LED fog lamps. For the rear look, Maruti has also incorporated redesigned LED tail lamps and a sleeker boot. The 12 spoke diamond cut alloys and subtle chrome garnishing makes the facelift version of the Ciaz even more premium and classy. No wonder the Ciaz continuous to be the best-selling premium sedan car.

For a car that was meant to be ahead of its time, the 2014 variant of the Ciaz featured a large and spacy cabin with an incredible amount of head and legroom even at the rear. In terms of practicality and styling, the dash of the Ciaz was styled to be subtle yet stylish. The centre console was dominated by 7-inch touchscreen infotainment system that was easy to navigate and use. The steering wheel was complimented with audio and call controls while the plastic and chrome used throughout the cabin were the best amongst all Maruti Cars. The 2014 variant also scored well in terms of practicality as it offered 1-litre bottle compartments for all 4 passengers. And while the glove box wasn’t that large the boot definitely was with a capacity of 510 litres.

The 2018 facelift version of the Ciaz, gave it an even more promising stance. While most of the interior detailing remained same, the facelift version still managed to incorporate changes such as a new 4.2 inch TFT MID to display vital information which now includes not only fuel consumption but also energy flow, driving range, trip details and shift indicator. The Ciaz also features an updated steering wheel as with all new cruise control buttons. Other features, such as the inclusion of Apple Car Play and Android Auto have made the infotainment experience even more enhanced.

But for those who craved for the smart hybrid system in the petrol variant, the facelift version of 2018 brought a new and refined 1.5 litre K-Series engine that could deliver 103 bhp along with 138 Nm of peak torque. The new petrol engine on the 2018 facelift variant was equipped with Mild Hybrid Technology. Even though the diesel engine remained the same, the the Maruti Suzuki Ciaz offers an impressive 21.56 kmpl mileage in petrol and a 28.9 kmpl in diesel. Owning to the BS6 norms in 2020 the Ciaz is now offered only with a 1.5 litre petrol engine powered by a 5-speed manual and 4 speed AMT transmissions.

In terms of safety, the 2014 variant of the Maruti Ciaz offered features like camera aided parking sensors, rear and front defogger, ABS and dual airbags. Other features such as the S-TECT body structure, engine immobilizer and an anti-theft system gave the Ciaz a safer touch.

The facelift variant went on to include safety features such as ABS with EBD, Hill hold control, ESP, speed-sensing door locks, ISOFIX mounts etc. The Maruti Suzuki’s safety is evident from its 4-star safety score in the ASEAN NCAP testing.

Maintaining its dominance for 5 long years, the Ciaz has managed to woo more than 2.7 lakh happy customers. No matter which Ciaz you settle for, each variant delivers not only premium looks, but also classy interiors and tough handling. Making the Ciaz, a sedan that lasts long.

The Maruti Suzuki Ciaz has always been priced competitively to match the likes of Hyundai Verna, Skoda Rapid, Honda City, Toyota Yaris, Volkswagen Vento, etc. The current version of the Ciaz comes in 8 different variants and 7 different colours to choose from with a starting price of Rs 8.31 lakh going all the way up to Rs 11.9 lakhs (ex-showroom Delhi)

One thing that makes Maruti cars the most popular choice in the pre-owned vehicle industry is its low depreciation and engine durability. In terms of pricing, you can bring home a Maruti Suzuki Ciaz used car for an average price of Rs 4.5 to 5.5 Lakhs for a 2014-15 variant, while newer Maruti Suzuki facelift variants can be purchased at an average price of Rs 8 to 9.5 Lakhs (2018-19).

Whether you buy a brand new Ciaz or a pre-owned one, Maruti’s fuel efficiency and low maintenance cost makes this mid-sized sedan a cost-effective purchase. And to add a cherry on top, don’t forget that the all-new Maruti Ciaz is capable of churning out a mileage of 20.65 Kmpl.

The Maruti Suzuki Ciaz is a complete package with modern looks, classy interiors and a rough and tough S-TECT frame coupled with a strong engine and efficient performance. And with Maruti’s nationwide sales and service network, you can be assured of a peaceful after sales experience.

And if you are looking for a place where you can buy certified pre-owned cars with a 5-day money-back guarantee, then visit Spinny’s nearest car hub today!