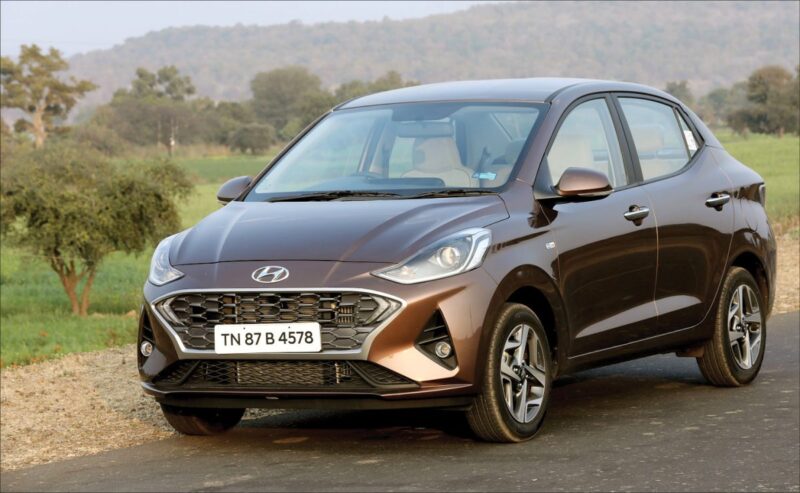 When it comes to the variety of manufacturers competing in a segment, the sub compact car segment is anything but compact. And with the Maruti Suzuki Dzire dominating with about 50% of the total sales, cars from all other car makers find it difficult to make a place for themselves. But if there is one company that is doing whatever it takes to not only face the cut-throat competition of the Dzire but also deliver a likeable and strong product; it’s India’s second largest car maker, Hyundai.

When it comes to the subcompact sedan segment, Hyundai has been giving a fair competition to the Dzire with its Hyundai Xcent, which holds a legacy of over 5 years. But owing to the changing consumer expectations from the segment, Hyundai has recently launched its latest competitor for the market; the all-new Hyundai Aura.

The Hyundai Aura has been designed to match the Grand i10 Nios, a trend previously seen with the Xcent-Grand i10 duo. Available in 9 color options, the all-new Hyundai Aura comes with a totally refreshed design language when compared to its predecessor, the Hyundai Xcent.

On the front end, the Hyundai Aura comes with a piano black hexagonal grille integrated with two “Boomerang” shaped LED DRLs, giving the Aura a sporty and attractive stance. The smartly creased bonnet and the chrome wrapped projector headlamps add an air of character to the front profile of the car. Completing the whole look is the segment first projector fog lamps.

The side profile also brings a lot of new elements such as the inclusion of chrome on the door handles, a shark-fin antenna and a black window line. However, what sets apart the Hyundai Aura is the attention to detail. Equipped with enhanced wheel arches, and cleverly integrated character lines both on the bonnet as well as on the side profile totally lifts the mood of the car. For the first time ever, Hyundai has also provided a beefed up C-pillar to give the car a coupe-ish look.

The best part about Hyundai’s new design is the rear of the Hyundai Aura. Completely justifying the idea of being sensuously sporty, the rear end of the vehicle comes with “Z-shaped” LED tail lamps with a 3D outer lens and a strip of chrome running across the boot. The coupe-ish black C-pillar and the sloping roofline give it a sense of masculinity. The rear bumper is also well-sculpted housing the number plate, rear camera and the two parking sensors.

When it comes to the interiors, the all-new Hyundai Aura seems to score a lot compared to its key rivals. Though the overall interior is almost a copy of what is offered in the i10 Nios, the Hyundai Aura does come with a distinct color theme and a sportier design for the turbocharged petrol variant.

The overall fit and finish in the cabin is the most premium and feature-loaded in the Segment. The all-new Hyundai Aura comes with a segment leading 8″ touch screen with a host of connectivity options. The steering wheel is also designed to be multifunctional with buttons controlling not only the audio and Bluetooth, but also the cruise control. The passenger side crash pad is beautifully integrated with a hexagonal design much like the front grille, giving the Aura a unique appeal.

The tried and tested 1.2-litre petrol and diesel engines are now offered with 5 speed Manual and AMT gearboxes and delivers 83PS of maximum power and 116 Nm of maximum torque. The petrol engine is now exceptionally well refined and feels more powerful than what was offered in the Hyundai Xcent.

Additionally, Hyundai has also equipped the all-new Aura with a segment leading 1.0 litre turbo charged petrol engine. Equipped with an all-new EcoTorq technology, the engine is capable of delivering a 100 Ps of maximum power and 175 Nm of maximum torque. The absolute rocket engine is quite a new thing in the subcompact sedan segment and could be a perfect choice for those who love to gun their accelerator.

In terms of mileage the Hyundai Aura returns somewhere around 17.36 to 25.4 Kmpl depending about the variant, fuel and gearbox choices.

As far as safety is concerned, the all-new Hyundai Aura comes with a first in segment emergency stop signal, reverse parking sensors, dual airbags, ABS with EBD as standard. Other features like driver’s rear view monitor, ISOFIX child support, headlamp escort feature are also equipped to give the Hyundai Aura a safer ride.

If you are someone looking for futuristic design and a powerful engine, then all the new Hyundai Aura is surely for you. And even though the looks are quite debatable, the overall styling offered will definitely attract most millennial. A worthy upgrade over the Xcent, the all-new Hyundai Aura offers a plethora of cabin comfort and connectivity features along with a powerful turbo charged engine.

In terms of pricing, the Hyundai Aura locks its horns with cars like the Maruti Suzuki Dzire, Ford Figo and Honda Amaze. Priced between Rs 5.79 to 9.22 Lakhs (ex-showroom Delhi) the Hyundai Aura comes as a perfect blend of freshness and power.

The Hyundai Aura introduces a new design language for Hyundai’s compact sedan offering. However, the previous generation Hyundai Xcent offers similar features to the Hyundai Aura in terms of space and reliability. The key difference in the interiors is a more tactile dashboard and a slightly older touchscreen infotainment system on the later models of the Xcent.